This is a large and impressive 4 bedroom detached Paphos Holiday Villa set over 3 levels and has been designed, furnished and landscaped to allow you a great villa holiday in the Cyprus sunshine. Villa Emelita is located in an elevated position allowing Sea Views from most areas of the villa with both Coral Bay and Peyia village centre just a stones throw away.

The villa enjoys all modern comforts as well as beneficial extras such as 8m x 4m Private swimming pool, shaded terrace under the villa with large dining table (seating for 8) Gas BBQ, large leather sofas (including very comfortable recliners), Large Flat screen TV with Satellite, 4 double sized bedrooms, 3 Bath/Shower Rooms, dishwasher, Wi-Fi and much more. All this added to the views to the Med and the outdoor lounging areas and you are in for a great holiday at Villa Emelita.

On entering the villa itself, you immediately sense the modern clean lines and smart design features. The lounge has a Large Flat Screen TV with Satellite and DVD, and is accompanied by 3 large leather sofas to comfortably seat 8 people. There are also 2 large single recliners to relax when you have has too much sun!

On entering the villa itself, you immediately sense the modern clean lines and smart design features. The lounge has a Large Flat Screen TV with Premium Satellite Channels and DVD, and is accompanied by 3 large leather sofas to comfortably seat 8 people. There are also 2 large single recliners to relax when you have has too much sun! The dining table has high backed leather cushioned chairs with large modern glass topped table seating 6 comfortably with option to move a further table and 4 chairs next to it. The kitchen is well equipped with fitted units and major appliances (in stainless steel colour) to include tall fridge/freezer, dishwasher, washing machine, oven hob and hood and microwave. There are many little extras which even includes a rice cooker!

Access from the lounge can be gained to a balcony with table and 4 chairs that allows lovely Sea views (perhaps) over a relaxed coffee. Making up the ground floor is a twin bedroom with adjacent shower room. Access to the upstairs accommodation is gained by a wide and open staircase and landing. The master bedroom features a double-sized bed, fitted wardrobes, and an en-suite shower room which has a large double cubicle. Access is gained to a further balcony with amazing views both day and night. There is a further double bedroom, twin bedroom and a family bathroom with bath and shower.

The villa is fully air-conditioned, has remote controlled ceiling fans in the dining area and all bedrooms have fitted wardrobes. All linen and towels are supplied, including those for by the pool. A hairdryer is included for convenience and to keep down luggage. The villa has the benefit of a traditional style wooden cot with 3 level
settings and also a baby changing unit. Wi-Fi is included with log on instructions inside the villa.

**The current IPTV system features most UK Sky channels (premium sports, documentaries, movies & music included) as well as many channels in German, Spanish and Russian. It also features a library of 900 movies, series and children's series which is regularly updated.**

Heading down to the lower ground level you will find a large covered space which overlooks the private pool area and accommodates table and chairs to seat the whole family as well as a BBQ. This makes the ideal place for relaxing in the shade, taking in the views, alfresco dining and socialising with your party. The private pool is 8m x 4m and is surrounded by sun loungers (8 supplied). Fencing surrounds the pool to assist with privacy.

The atmosphere in this area is further enhanced by the large palm trees and parasols for shade as desired. An outside shower completes this area.

Winding up through the banana plantations after a short drive along the coast road from Paphos brings you to Peyia where Villa Emelita is located on the hillside overlooking Coral Bay. Peyia is a very typical Cypriot village which has been developed over time to be a vibrant ‘mini-town’ offering great amenities. With many restaurants, tavernas, cafes, bars, shops, bakeries, butcheries, supermarkets, pharmacy, gym and other facilities all within 2-3km of each other, there really is no need to leave the village if you don’t want to. A beautiful ancient church forms the heart of the village while the narrow streets and alleyways are full of old and interesting houses adorned with colourful flowers and citrus trees. The village centre is still largely unspoilt with lively tavernas and friendly locals. You can also buy all your provisions including fresh meat and bread in the village stores; the early morning aroma of freshly baked bread, sweet and savoury local pastries and cakes coming from the Peyia bakery is almost too much to resist! For the more energetic types there is the local and newly opened ‘Tower Fitness Centre’. Coral Bay with it’s beaches, shops and slightly more vibrant nightlife is just 2km away.

Things to do in the area include Paphos Bird Park (now Paphos Zoo), reptile park, horse riding, Akamas Peninsular & Lara Beach Nature Reserve (famous for turtles), hiking/walking, buggy safaris, 4 x 4 safaris, sea caves area, sailing and many more. Amusement and water parks in Paphos are also easily accessible from Peyia, as are numerous archaeological ruins such as the Tombs of the Kings and Paphos mosaics. If you want to get out and explore some fantastic scenery, take a trip to the Akamas Peninsula, Polis, Latchi or even Troodos mountains.

The Akamas is an untouched part of Cyprus with unspoilt coastline and traditional fish taverns in stunning seaside locations. Troodos is of course the main mountain range in Cyprus, not many people know that in the winter....you can ski! Paphos combines ancient history with a cosmopolitan, modern tourist resort. The area by the coast is known as Kato Paphos and boasts a pretty little harbour and plenty of open air cafes and bars.

Further inland is the old town of Paphos, known by the locals as Ktima. With its narrow streets, hustle and bustle, covered market and typically Cypriot atmosphere, it is well worth a visit. As a consequence, Paphos is on UNESCO's World Cultural Heritage list. Cyprus is famous as the birth place of the goddess Aphrodite, Venus in Roman mythology. She is known as the Ancient Greek goddess of love and beauty. Legend says that she emerged from the sea at Aphrodite’s Rock in a surge of sea foam.

For more details on the Peyia Area as well as Paphos & Cyprus visit our area pages at: Peyia 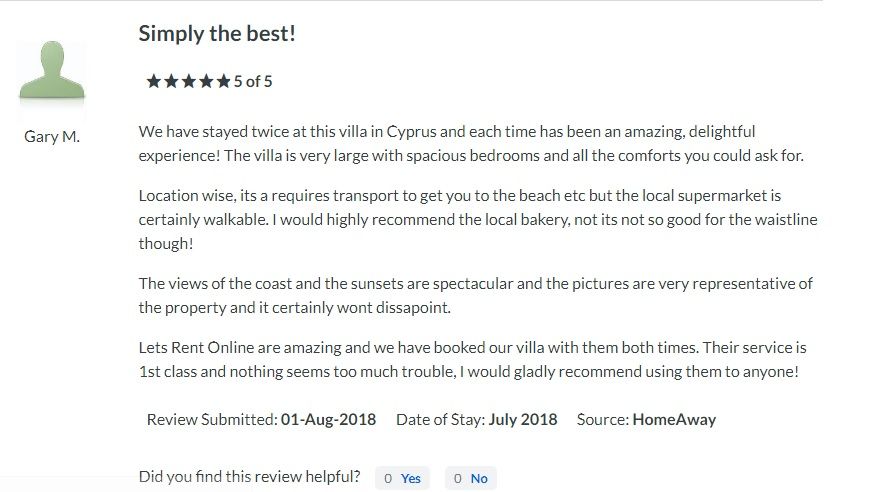 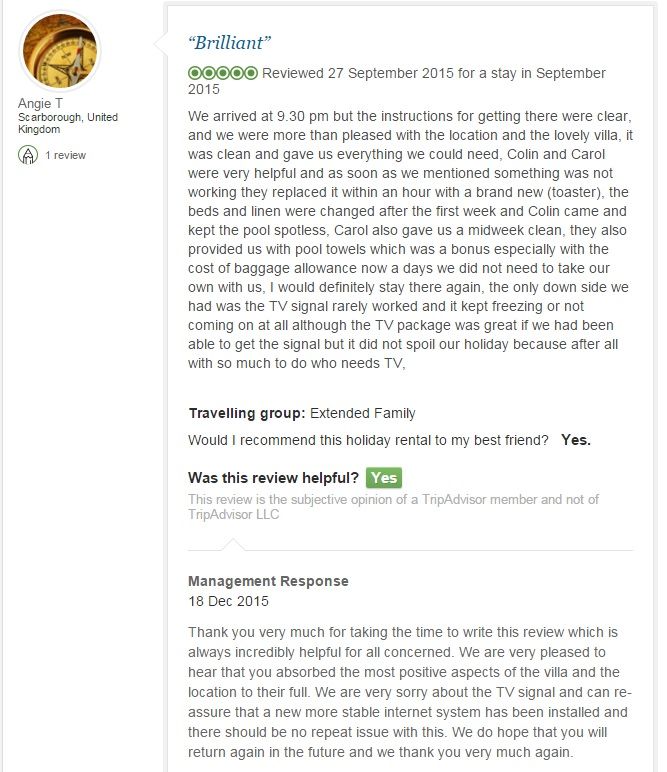 All Converted Rates are based on current exchange rates and for Viewing Purposes only. The inevitable payment currency is always £GBP (Euro bank transfers possible)

A refundable security deposit of £100 is required to cover any damage or breakages to the property.

Flexible
Access to the property is anytime from 3pm on arrival.Guests must vacate the villa by 11am on the day of departure.

LATE AVAILABILITY DISCOUNT
Bookings of 7 nights or more made within 28 days of travelling discounted by 10%
LOW OCCUPANCY DISCOUNT
1-2 guests: 10%, 3-4 guests: 5%
Only one discount can apply

Please note that a move to future dates is always offered for new bookings in any period where severe restrictions prevent the travel. If new dates cannot be determined or finalised at time of cancellation/restrictions then a voucher/credit note would be offered.


Check the Special Monthly Rates for our Winter Lets in Paphos, Cyprus